Laserblade has received its first review and it's on Board Game Geek, the one-stop-shop for all things board game related.  The BGG page for Laserblade along with review can be found here.  The reviewer, a chap called Brett, was even kind enough to contact me by email and give me some positive feedback on the game.  If you're reading this; thank you, Brett!

As some readers will know, our first game - Alien Worlds - was released as a charity venture.  While we may not be contributing much to our chosen cause, there's a brief article on the main Echidna Games website all the same detailing our performance which can be found here.

No other news for now but watch this space for updates our next ebook release!

Neil
Posted by Unknown at 14:14 No comments:

Well, the blue lady from the Airfix Space Warriors set now looks like this: 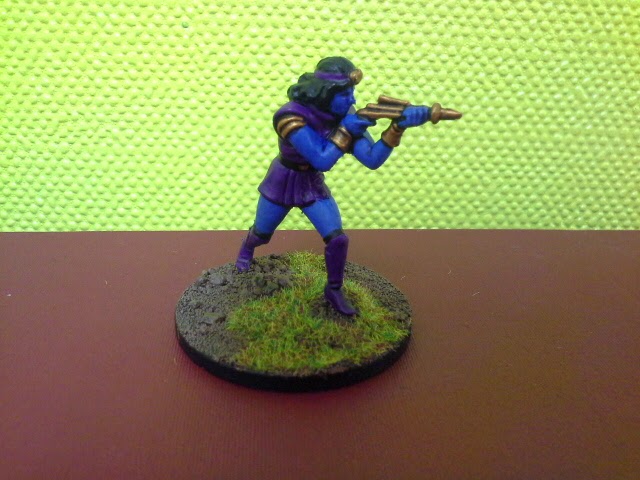 Not too shabby, if I say so myself.  The black hair could have looked better with a bit of a highlight but I still like it.  I've had some fun ideas for back story for her too.  That thing round her head is the  source of her people's power and she stole it.  As she wrestled its rightful owner for possession of it, he/she forced her back through time.  Trapped in her planet's past and her with her dreams of usurping the crown dashed, she now turns her attention to using the powers of the jewel to carve out an existence for herself...

I have some ideas for whom she might be going into battle alongside and will add them here as we go.

In other news, we had a game of Laserblade at Echidna Games HQ this week, my own Evil Overlord (more Space Warriors figures) versus Daniel's Star Wars Command team made up of two jedi and four ewoks.  Playing a scratch game in a short space of time, we opted for a three foot table and I think this was to Daniel's advantage as all six of his figures were close combat fighters.  I killed one jedi and a couple of ewoks but once they made contact with my goons, they made short work of them.  When he eventually had to take a valour check, all of Daniel's models stood firm.  When it came my turn to do the same, my last couple of characters lost their bottle.  Notch up another win for Daniel's ewoks!

Before I go, one last thing.  We now have our first review on www.boardgamegeek.com from a chap called Brett Christensen and you can find it on the Laserblade page here.  Thank you, Brett!
Posted by Unknown at 15:21 No comments: