Today at Echidna Games HQ, we had two Star Wars-inspired games of Laserblade using the excellent (but now sadly cancelled) Star Wars Command toys from Hasbro.  The first game was a simple toe-to-toe fight in which the Rebels barely came out on top and the second was a retrieval mission using a frozen Han Solo figure as the token in which the Empire won out.  This second was an extremely close game and if Yoda had just held out until the end of the turn he'd have secured bonus points for his team and a strong win, but alas he was blasted by a stormtrooper in the nick of time!

Sorry, I should have taken pictures...

Anyway, this got me back onto thinking about how best to stat out the famous faces from a galaxy far, far away and I've come up with a couple of new abilities which I hope will add a bit of flavour for the supporting cast.

I thought this would be a good way to represent Chewbacca's protective nature or the security services of a bunch of gamorrean guards.

Lucky (E)
Cost - 4CP
Description - once per round, this character's owner may choose to have any die roll affecting this character re-rolled.  The re-rolled outcome is final.

This one is inspired by Han Solo's ability to survive close scrapes.  It's an elite ability so its use is limited, and of course by no means guaranteed.

Please try both of these out and let us know what you think.  Coming soon, ancient weapon and hokey religion special abilities...

We're in the pipe five by five

I'm always on the lookout for models that can be used in our games and last weekend, this arrived at Echidna Games HQ: 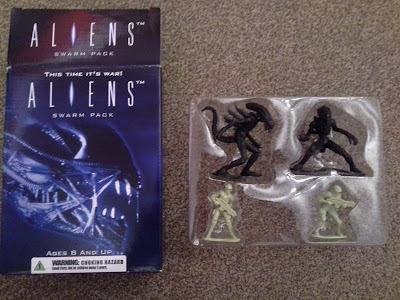 These figures were released by a company called Tree House Kids - not an organisation I'd even heard of until very recently - back in about 2004.  This box is actually one of several "blind bag" style sets released at the  time.  As I understand it, the idea was that you bought a sealed box not knowing what was inside but this one, bought second hand on ebay, had already been opened and the seller was quite upfront about that and the contents.  I thought two Colonial Marines and two Alien Warriors looked like a good way too start my collection.  Close up, the figures look like this (1:32 Airfix Space Warrior for size comparison): 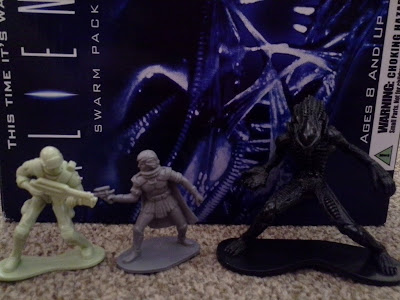 The Marine, for a human-sized model, is taller than your average 1:32 or 54mm figure, and disproportionately slimmer too to the point that he looks like a normal figure reflected in a funhouse mirror.  The Alien Warrior, however, looks very cool and towers over even the lanky Marine.  A handful of those would look great on your tabletop.

That said, I paid about £8 for these including postage and for that same money, I could but a pack of at least nine Star Wars Command figures so I don't think these are great value as far as toys go.  For collectors that want to pay a premium, fine, but frankly I'd be happier with a big bag of Galaxy Laser Team.  Horses for courses though and all that.  And if you are in the mood for spending money on these, this set has got to be top of your list: 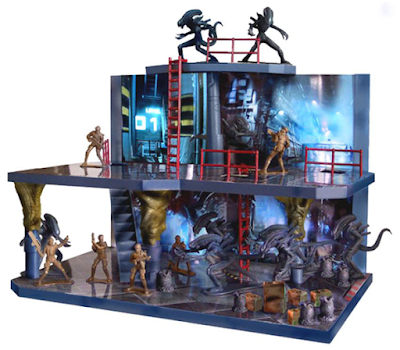 So anyway, how can we use these in our games?  Well, I'm thinking they're a good option for Laserblade.  The marines are pretty standard.  Probably something like this:

You'd probably want a Sergeant in charge of your squad.  They'd be the same as above but with the commander special ability for a total 20CP.  For a marine with smartgun (and it looks like they made models of both Vasquez and Drake), add rapid fire to the template above for a total 20CP.  You could get one sergeant, one smartgunner and four marines for 100CP.  Probably quite competitive.

The aliens are a little different and have prompted me to introduce a new ability:
Acid Splash
Cost - 3CP
Description - when this character is destroyed, it explodes into a shower of acid.  Each character in base contact with it is immediately attacked with a 6+ close combat attack.  Characters that are hit are destroyed.  Characters make armour saves as normal but any character that makes a successful armour save may not make armour saves for the rest of the game (this represents the fact that the armour is damaged by the acid).  Other chracters with acid splash are not affected by acid splash.

A squad of six aliens would cost you 90CP.  That prompted me to come up with another ability but this time one that applies to the whole team.

Hive Mind
Cost - 10CP
This rule applies to your whole team.  While your team consists of at least two characters, and your characters are in cohesion, your team is treated as having a commander.

This, rather neatly, brings the cost of that alien squad up to 100CP.  Six marines versus six alien warriors?  Will it be a successful bug hunt or will it be game over, man?  Looks like I'm going to need to find some more figures!