After a couple of false starts, Echidna Games are proud to present to you the first instalment of what will probably be a fairly occasional blog.  Our aim will be to not only bring you news about our titles but also to share general hobby stuff that we think might  be of interest.  Hopefully that'll go down alright with the great gaming public but we'll just have to see.

Just in case you don't know who we are or what we do, Echidna Games is a small, independent publisher of wargaming rules.  Heard of Games Workshop?  Well, if Games Workshop is an elephant, we're the benign, slightly sweet-tasting fungus under one of its toenails.  We have two titles in our inventory so far and both are available to download for Kindle.  There will be flashy-looking links for them somewhere on this blog page eventually but for now:

Alien Worlds - miniatures rules you can enjoy with your children

As far as future titles go, we had originally planned to release a fantasy-themed game based on the  Laserblade mechanics at some point this year.  As it stands, Battleblade will still be released but first up will be a "modern warfare" game, currently called Iron Sights.  It's early days yet but it's likely this will borrow heavily from the Laserblade mechanic but carry a more "realistic" feel - at least as realistic as pushing toy soldiers goes anyway.

So that's that.  True to our word, we also wanted to share a bit of hobby stuff and show what's on the Echidna Games workbench right now.  That would be this little lady: 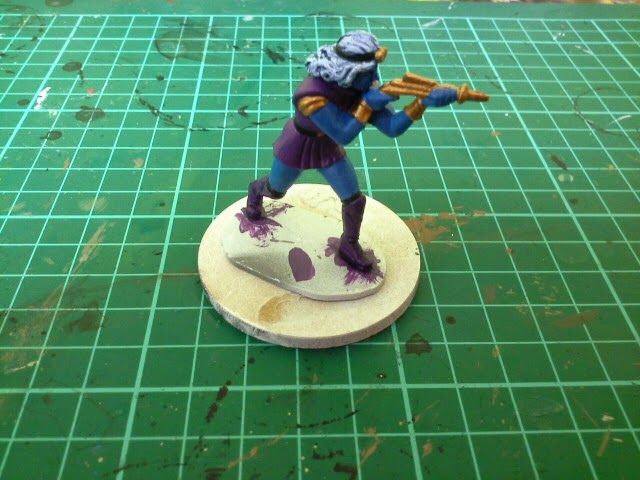 She comes from an old Airfix kit called Space Warriors from way back in the 80s.  Interesting piece of trivia (which may or may not be true); she is the only female figure released by Airfix in 1:32 scale.  We decided she looked suitably otherworldly to not be painted in a conventional flesh tone so instead opted for blue.  The hair is a bit of an experiment that failed, using blue ink over a white basecoat in an attempt to make a light blue shade.  The first order of business is to fix that, then get her inked and based, ready for battle.

We reckon that thing on her head must grant her some special powers.  But what?