Time can be weird.  I remember posting the Hive Mind rule for Laserblade on here a few months ago.  Well, it turns out that was over a year ago!

Anyway, I have another to add to the mix; Special Ops.  Like Hive Mind, this ability applies to your whole team.

Special Ops (10)
This ability applies to your whole team.  Every member of your team must be elite (either by way of an elite ability or with a CP cost of 20+).  Each of your defeated characters is worth an additional 5VP to your opponent (after other modifications).

The idea is to allow players to build a super team of elite individuals, but not without paying for the privilege.  Firstly, assuming a 100CP game, a player that opts for a Special Ops team only has 90CP to spend.  In addition, each of characters that meets a sticky end is worth more to his opponent (note that the extra 5VP are added after other modifiers like the rules for Bounty Hunt).  All this alongside the fact that a smaller team comes with inherent risks as things already stand hopefully means that it's not overpowered, just nice to have the option.

Hopefully you'll try this rule out.  If you do, let us know how you find it.  In the meantime, we'll get thinking about the opposite end of the spectrum - a team ability that benefits those players that prefer to put together a swarm of weaker characters.  Watch this space...

Lost in the Swamp - a Star Wars Battle Report

Friday night at Echidna Games HQ saw host to another Star Wars-themed Laserblade session, this time using the retrieval scenario (page 21 of the rulebook - we're playing 6 rounds).  The action is set on an unnamed temperate moon somewhere in the mid rim.

Having been undercover at a local Imperial base for nearly a year, the Rebel droid R3-BL has acquired vital information about the Empire's plans for the sector and has made his escape.  However, as he approaches his rendezvous, he becomes bogged down in the swamps of the planet's sunken city and with no way out himself, signals to his Rebel allies for help.  Han Solo and Chewbacca gather a small team of loyal troops and head out to find the droid.  Meanwhile, the Empire has intercepted R3-BL's signal and deployed a small squad of Stormtroopers to retrieve the wayward robot.

We join the action as the two opposing forces come within sight off the stranded astrodroid.  The table looks like this...

The Rebels gain the advantage but then roll a 1 for activations which, even in cohesion with a commander on the field, allows them to move only a single character.  Han moves into the woods and takes a shot.  He needs a 7+ and scores a 4.  Now, Han is lucky which means he could re-roll but the Rebel player chooses to save the re-roll, just in case.  The Imperials follow up with two activations, first moving the weapon specialist.  He shoots at Han, needing a 9, and misses.  The rapid fire rule lets him shoot again but it's another miss.  A regular stormtrooper then advances and cracks of a shot at Han in the process.  Stormie needs 8 and rolls a 10 - bang on target.  Now the Rebel player uses Han's luck, forcing a re-roll with an ever-so-slightly smug look on his face.  But it's a another 10!  The great Han Solo is out of the game in the first round!

Very rarely does the initiative roll make for an exciting spectacle but this one was good.  The Empire rolls 9 which, with the bonus for having a commander and being in cohesion, means 11.  The Rebels, now missing a commander but still in cohesion roll 10, also meaning 11!  The Rebels then win the roll off and gain 2 activations.  A Rebel Trooper moves forward and takes a crack at the Stormtrooper in the open but his shot goes wide.  His buddy moves up to join him and scores a hit on that same Stormtrooper but ol' Stormie makes his armour save.  No kills yet for the Rebels.  The Imps follow up with two activations of their own, using the first to move that foremost Stormtrooper up to grab the droid.  If  either side can get the droid off the table it'll be worth lots of victory points and the Empire look to have gained an early advantage.  Worse news for the Rebels; the Empire's weapon specialist manages to take out the two Rebel Troopers that just moved up!

The Imperial team is now out of cohesion which levels the playing field for the initiative roll.  The Rebels win and gain a much-needed three activations!  First, a Rebel Trooper moves into the position just "vacated" by his comrades.  He shoots but nothing seems to be able to scratch that Stormtrooper.  Cue the mighty Chewbacca.  He strolls into the wood and fires at the Imperial.  It's a hit!  And Chewie's carrying a heavy weapon so no armour save for Stormie.  Finally some good luck for the Rebels.  It keeps getting better as the remaining Rebel Trooper takes a shot at the Empire's weapon specialist.  He needs a 9, and gets a 10.  Looking good so far and then the specialist fails his armour save.  Could the tide of battle be turning?  The Imperials gain two activations and advance and shoot but can't land a shot on target.  Suddenly it's anyone's game again!

The Rebels win the initiative and gain three activations again.  Surely they have it made now.  Actually, no...  Chewie shoots and the two Troopers advance with blasters blazing but no-one can find their mark.  They have gained control of the droid now though and the Stormtroopers will have to work hard to wrestle it back off them.  The Imps are out of cohesion and roll a 2 for activations.  Even with their commander still in play that's only one activation.  One of the Stormtroopers take a shot; he has elected not to move, making a hit more likely.  All he needs is a 4.  It's a 3...  Lots of shooting this round but not one shot on target.

The Rebels win the initiative for the fourth round in a row despite being out of cohesion and leaderless.  The Rebel Troopers withdraw and manage to dispatch two Stormtroopers as they go, even with one of them being encumbered by the droid.  The Imperials open fire with their two activations but try as they might, their shots go wide of the mark again.  At the end of the round, the Imperials are forced to make a valour check because of their losses.  The regular Stormtrooper stays in the game but the commander gives up the fight.  The Imps are down to just a single man as we enter the final round.

On the final round, the lone Stormtrooper wins the initiative and scores two activations.  As he's on his own, the extra activation will give him a re-roll.  He manages to blast the Rebel Trooper with the droid at the second try.  The Rebels gain themselves 3 activations which, as they're now down to just two characters, also earns them a re-roll.  Chewie blasts the Stormtrooper on the re-roll (no armour saves against the wookiee's heavy weapon) and the remaining trooper grabs the droid.  The Rebels do have a valour check to make but both Chewie and the Trooper pass.  It'll be a win for the Rebels but the question is by how much.

The Imperials score 65 points for Han and the three Rebel Troopers.  To score a decisive victory, the Rebels need at least double this total.

The Rebels score 100 points for defeated Stormtroopers plus a bonus for being in possession of R3-BL equal to a D10 roll x 3.  The roll is a 7 so that's 21 more VP for a total of 121.  Not quite a decisive victory but close to it.  Time for the Rebels to find out if that data was worth the price they paid...

If you fancy trying Laserblade for yourself then you can pick up a PDF copy at wargamevault.com
Posted by Unknown at 05:14 No comments:

We've already made a bit of a song and dance about this on Facebook but just in case you weren't aware, Battleblade is live!  Click the image below to  grab your copy from www.drivethrupg.com! 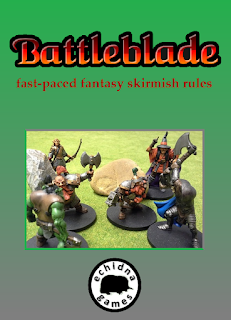 The development doesn't stop there!  We have a few projects in the pipeline and are deliberating over which one to go ahead with next.  If you have an opinion on the subject then we'd love to hear from you!  We're thinking either:

a) A (possibly free) supplement detailing suggested stats for some of the more well-known 54mm ranges on the market; this will be a bit like we have been doing on our Facebook page but with added depth.

b) Advanced Laserblade - a follow up to the original with more sophisticated rules with options for larger forces and even vehicles.

So there you have it.  Which should we go for first?

I've been busily at work on the rules for Battleblade these last couple of weeks and am pleased to say that I am drawing to a close on the first draft.  Although I expect numerous corrections and revisions between now and the final edition, it's none-the-less satisfying to get that first draft banked!

The revised close combat rules seem to work quite well and I've just been putting the finishing touches to the rules for magic, both elements that will hopefully set Battleblade apart from it's older sibling Laserblade.

Speaking of Laserblade, I've seen two different but equally exciting examples of people around the world playing  our game recently. Earlier this week I posted a link on our Facebook page to some in-game shots of a Star Wars themed Laserblade battle in progress.  Click here to visit our Facebook page and check out Steve's photos!  I love Steve's no frills approach - Star Wars Command toys, packing inserts for bunkers - it's the quick and fun approach to wargaming that I hoped I could encourage with my own games.

Here's a photo from one off our own games using a similar approach:


At the other end of the spectrum are some frankly fantastic photos from a chap called Timothy Hall.  Timothy's images were posted to a closed Facebook group this week so I can't link to them but with his kind permission, here are a couple of my favourites:﻿﻿﻿﻿


I'm sure you'll agree that those models and that scenery look amazing.  I really like the red armour on those aliens and the tin hats on the androids.  Exceptional stuff!
If you fancy trying to emulate Timothy's figure paining then be sure to visit our ebay shop - we have the aliens and the androids for sale!
It really I great for us to see other people playing and enjoying our games - long may it continue and I look forward to seeing Battleblade being played in the near future.  Back to work for me it is then...
Posted by Unknown at 14:02 No comments: